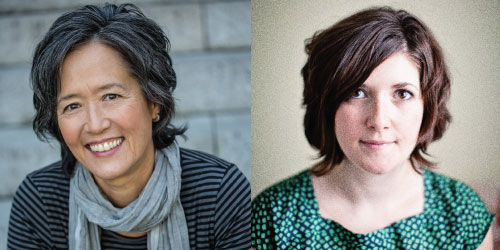 In Episode 42 of the PEN/Faulkner Podcast, Man Booker Prize finalist Ruth Ozeki and Guggenheim Fellow and short story writer Claire Vaye Watkins read from their work and discuss the fine line between real and imagined experience.

Ruth Ozeki is a novelist, filmmaker, and Zen Buddhist priest whose novels include My Year of Meats, All Over Creation, and A Tale for the Time Being, which was shortlisted for the Man Booker Prize. Her films have been shown on PBS, at the Sundance Film Festival, and at numerous universities. She lives in British Columbia and New York City.

Claire Vaye Watkins is the author of the story collection Battleborn, which was named a Best Book of 2012 by the San Francisco Chronicle, Boston Globe, and Time Out New York. In 2012, the National Book Foundation named Watkins one of the 5 Best Writers Under 35. She teaches at Bucknell University in Lewisburg, Pennsylvania, and is a 2014 Guggenheim Fellow.

Thank you to Benedict Kupstas and Field Guides for donating the music used in this episode. Listen here to Field Guides’ album Boo, Forever.