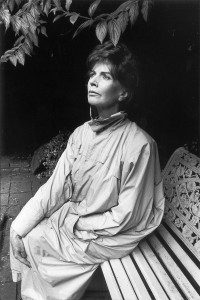 Edna O’Brien has been hailed as the doyenne of Irish literature. From the beginning of her career, O’Brien broke literary ground, writing openly about female sexuality in her first novel, The Country Girls. The book was lauded by critics and banned by the Irish Censorship Board. The idea that women had sex lives was, at that time, an obscene notion.

In the half century that’s followed, O’Brien has become one of the most celebrated writers in the English language.  She’s received the Frank O’Connor Short Story Award, the Irish PEN Lifetime Achievement Award, and honorary membership in the American Academy of Arts and Letters. O’Brien joined Stephen Goodwin at Sixth & I Historic Synagogue to discuss her latest novel The Little Red Chairs – her “masterpiece,” says Philip Roth – and to share her singular genius with us.