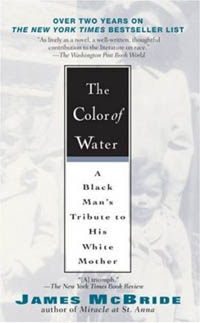 Greetings all. I’m Max, and I’m an intern for PEN/Faulkner, helping out behind the curtain. This week, a number of authors appeared at our annual Gala, held to benefit both our Writers in Schools program and the PEN/Faulkner Award for Fiction. The event featured twelve different authors tasked with reading on the same theme (“Writing on the Wall,”) and among those authors was memoirist and musician James McBride.

McBride penned the bestselling memoir The Color of Water, a book read and enjoyed by kids in the classrooms of our own fair city, as well as in a multitude of others the world over. And since it’s a tradition for our Gala readers to visit DC high schools during their stays here, I accompanied Mr. McBride to Mr. Igoudjil’s English class at Calvin Coolidge Senior High School last week to observe the phenomena for myself.

He cut a casual figure in person, yet McBride knew how to engage a full classroom, and the early morning class had no shortage of enthusiasm in response. McBride started off by opening the floor to questions.

Hands popped up around the room. Students questioned McBride about his hardships in growing up and how his experiences have shaped him. A vibrant conversation followed, in which McBride talked about his upbringing and life choices, as well as the future decisions facing the room’s occupants. 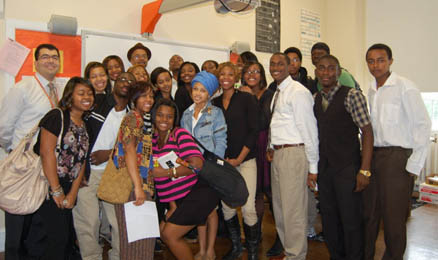 Gala author James McBride (in the back, with the Fedora) with Mr. Mr. Igoudjil’s English class at Coolidge.

Able to strike a serious chord but also to make the class rupture in laughter, McBride engaged the students while seeming equally captivated by their questions. He’d occasionally pause after a student spoke to furrow his brow and murmur, “That’s a good question…” before launching into a provocative response in which he would often converse with the student regarding their own opinions. The students displayed an openness which McBride mirrored. You could see it in the way he flippantly remarked, “Why’re you late?” to the few students who came in after class had begun and made them tell the class what’d caused their tardiness, then excused and sympathized with them. You could hear it in the stories he told them, which ranged from the levity of his bawdy schoolboy antics to the seriousness of the way his mother, the subject of his book, lived her life and raised her children. The feeling in the room belonged more to a meeting of equal minds than a student-teacher style conversation. Not a bad way to kick off your morning.

Thanks to McBride, Mr. Igoudjil and the students of Calvin Coolidge. If you’re a DC high school teacher and you’d like to schedule a Writer’s in Schools visit, contact us at [email protected].