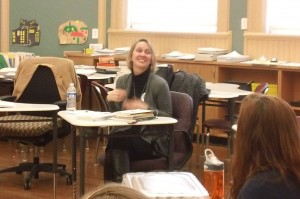 In early March, Leslie Pietrzyk stopped by the School Without Walls to discuss her novel, Pears On A Willow Tree. During her visit, she discussed cooking, a theme that pervades her novel and provided the inspiration for writing it. It all began, Ms. Pietrzyk explained, with several failed attempts to make pierogi (dumplings). Her determination to learn how to make pierogi led her down an unexpected path of discovery about her own family and their hidden stories.

Pietrzyk explained to the students how cooking can be a form of expression. This was the case with her great-grandmother, who was eager to help Ms. Pietrzyk learn the technique of making perfect pierogi. It was through the medium of cooking that the two family members were finally able to communicate.

The students wanted to know about Ms. Pietrzyk’s process in writing Pears On A Willow Tree. After that visit with her great-grandmother, Ms. Pietrzyk explained, she wrote one chapter. That chapter spawned another, which spawned another. Before she knew it, she was writing a novel. But writing the words is half the work, she clarified to the students. After writing comes editing and rewriting. She recalled the countless sessions with her editor, where they were constantly adding, cutting out, and reformulating sections of the novel. The complicated process resembles her pierogi story, with many failures leading to the successful (and delicious!) final product.

Ms. Pietrzyk wanted to learn about her family, but got stopped by a language barrier. Cooking provided the channel for communication and the inspiration for Pears On A Willow Tree. The novel’s title, in fact, illuminates this process. She explained to the students that the name of the book comes from an old Polish proverb, meaning, “You’re looking for something you will never find.” Ms. Pietrzyk was looking for a recipe to make dumplings. And what she found was an unexpected form of expression.

Thank you to Filipa, who is one of our Curriculum Project Interns. And thank you to Mr. Ismail and his students and Leslie Pietrzyk. You can visit Ms. Pietrzyk’s writing blog here.