Poetry Down the Lane

Do you remember the childhood game “Telephone” (or “Whisper Down the Lane”), where the first person in a line would whisper a phrase to the person behind them? This process is continued down the line—the phrase being repeated and often reinterpreted—until the last person compares what they believe they heard to the original phrase. Well, we had the students tap into their artistic sides as we played this game with a colorful poetic twist.

Each student was given an imagery-heavy poem and then drew (with crayons!) their interpretation of the poem. We then traded papers and the next person had to write a poem based on the picture, not knowing what the original poem was. Once everyone was done writing we read both the new poems and original poems to see what concepts carried over as well as what ideas were lost and what new ones were gained. It was a really fun exercise that worked with both imagery and poetry. Since we had a small class size this week, Ariel and I were excited to join in too! Check out the poems and drawings below:

Mother to Son by Langston Hughes

Well, son, I’ll tell you:
Life for me ain’t been no crystal stair.
It’s had tacks in it,
And splinters,
And boards torn up,
And places with no carpet on the floor—
Bare.
But all the time
I’se been a-climbin’ on,
And reachin’ landin’s,
And turnin’ corners,
And sometimes goin’ in the dark
Where there ain’t been no light.
So, boy, don’t you turn back.
Don’t you set down on the steps.
‘Cause you finds it’s kinder hard.
Don’t you fall now—
For I’se still goin’, honey,
I’se still climbin’,
And life for me ain’t been no crystal stair. 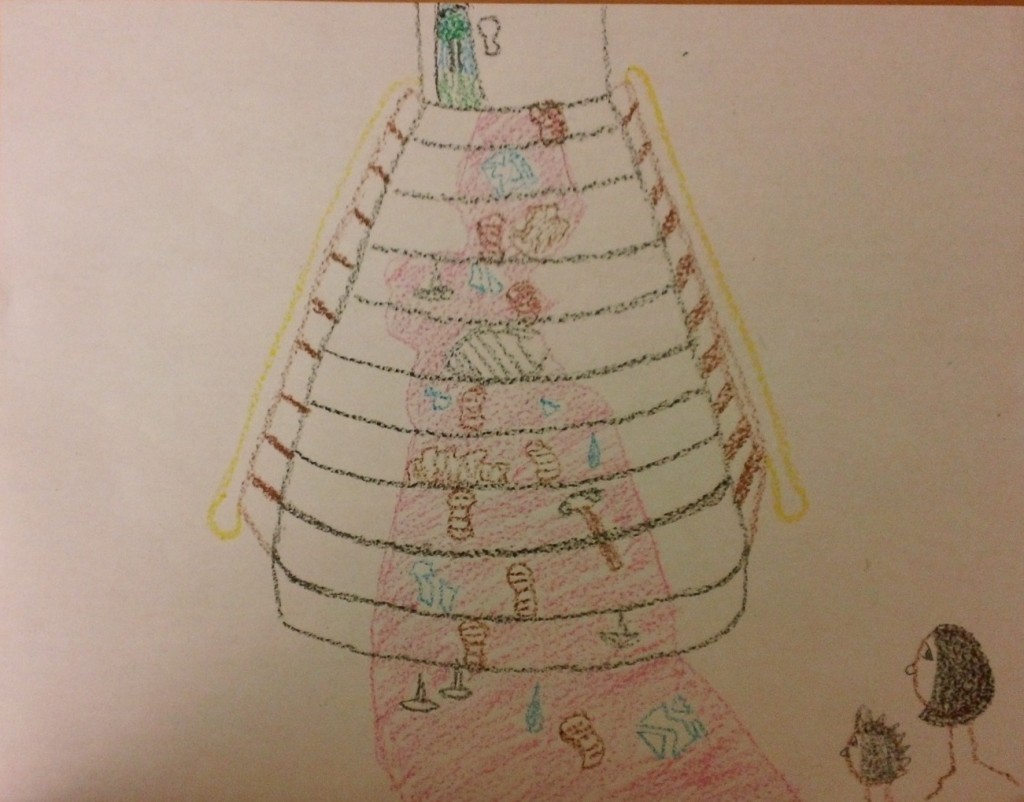 The lookers of heaven’s door
Stare with the want and desire
Of those who can not have
Man’s possessions lead the man
And the key of heaven’s mighty
Gate, and trees beyond it are
A taunt of what could be
Gold barriers, help guide the saints.
And dirty brown ladders for the
Common morally decent
Heaven is not equal, the closer
to God higher than the woman
that raised his kids righteously
the man who’s money is more  holy than
he stands looking at the mighty king
and the woman too vain to serve
her lord stands beauty faded staring
as the meek, ugly, and twice shy
rise to the holy life
as the rich, beautiful, and confident
stand waiting for hell to sweep them away. 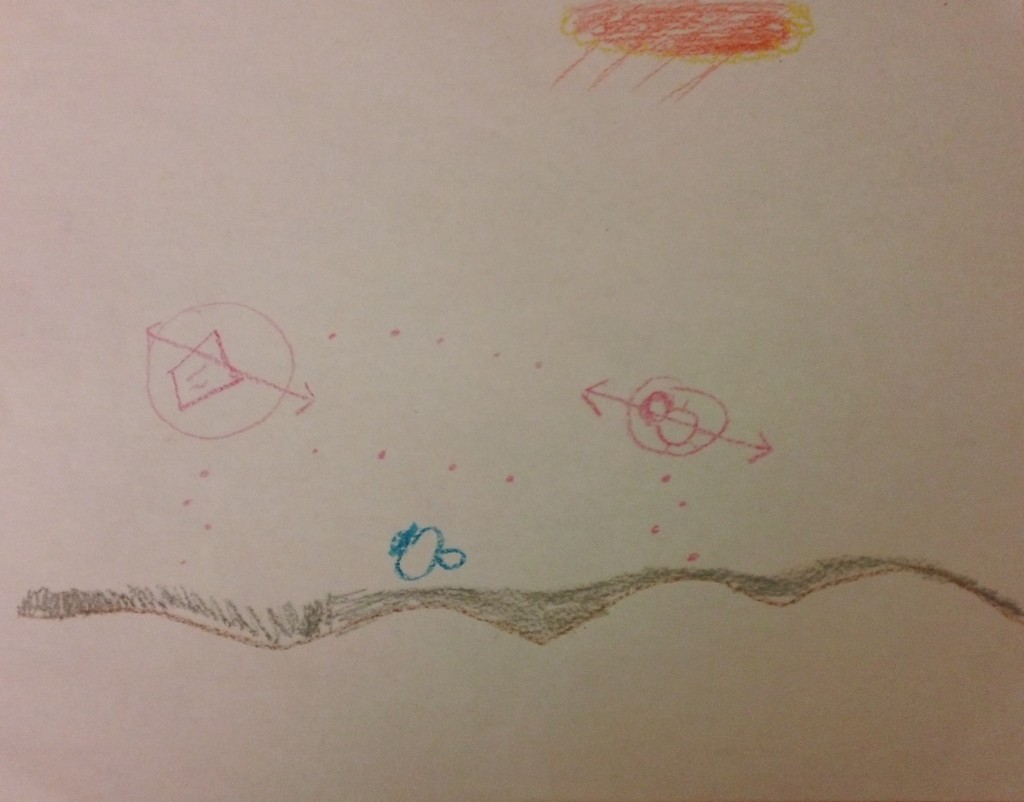 Orange skies above
Storms occur
Storms on our dreams
Hopes of graduating and gaining a
Diploma dream.
Having kids, not a dream.
Having children while financially secure
Dream.
The ground Falls from beneath me
The asphalt goes
The cement shatters
Everything goes
Nothing is left
So nothing is all I have left.

Lying in a Hammock at William Duffy’s Farm in Pine Island, Minnesota by James Wright

Over my head, I see the bronze butterfly,
Asleep on the black trunk,
Blowing like a leaf in green shadow.
Down the ravine behind the empty house,
The cowbells follow one another
Into the distances of the afternoon.
To my right,
In a field of sunlight between two pines,
The droppings of last year’s horses
Blaze up into golden stones.
I lean back, as the evening darkens and comes on.
A chicken hawk floats over, looking for home.
I have wasted my life. 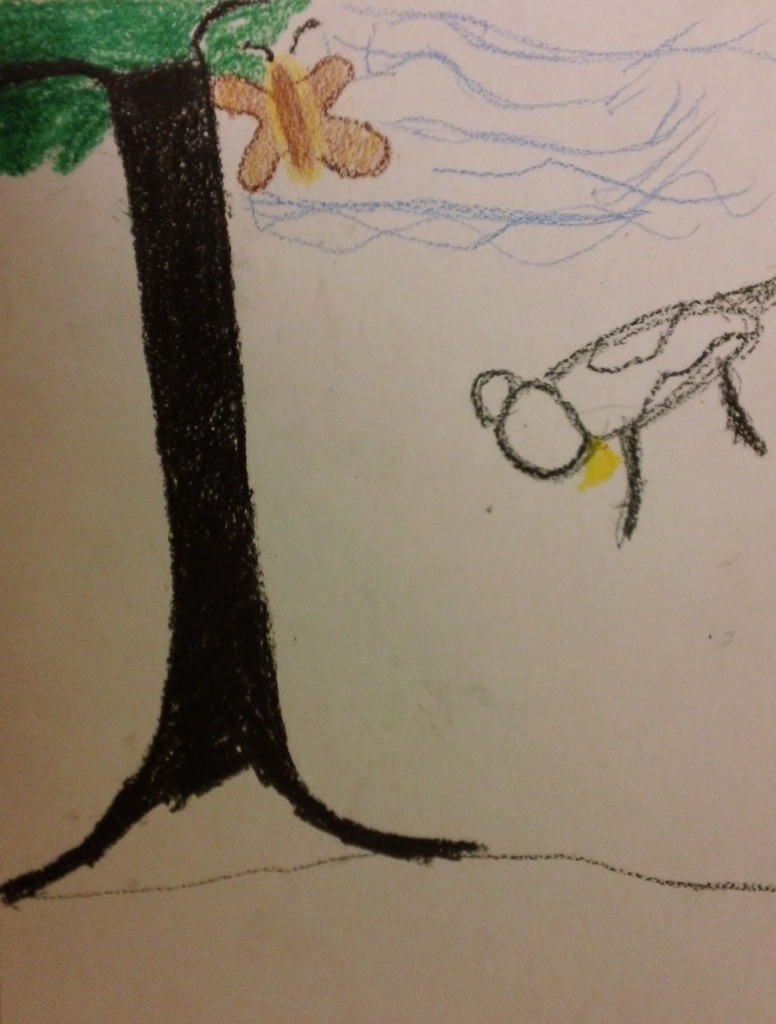 Floating
Clanking
The cow flies by, moving
In and out
Of my daydreams–
Featherlike.
Never mooing
Just clanking
Against my skull.
I wish it would find its way out
my ear
so I can focus on the
butterfly
and trees and blue skies and…
Normal daydreams
Elude me.
My tree is black
Death creeping from the roots
Fading away
Save for the few green leaves.
Normalcy.
Normalcy.
But I cannot, still cannot,
Capture the butterfly.

Water Picture by May Swenson

In the pond in the park
all things are doubled:
Long buildings hang and
wriggle gently. Chimneys
are bent legs bouncing
on clouds below. A flag
wags like a fishhook
down there in the sky.

The arched stone bridge
is an eye, with underlid
in the water. In its lens
dip crinkled heads with hats
that don’t fall off. Dogs go by,
barking on their backs.
A baby, taken to feed the
ducks, dangles upside-down,
a pink balloon for a buoy.

Treetops deploy a haze of
cherry bloom for roots,
where birds coast belly-up
in the glass bowl of a hill;
from its bottom a bunch
of peanut-munching children
is suspended by their
sneakers, waveringly.

A swan, with twin necks
forming the figure 3,
steers between two dimpled
towers doubled. Fondly
hissing, she kisses herself,
and all the scene is troubled:
water-windows splinter,
tree-limbs tangle, the bridge
folds like a fan.

And then she drew this picture: 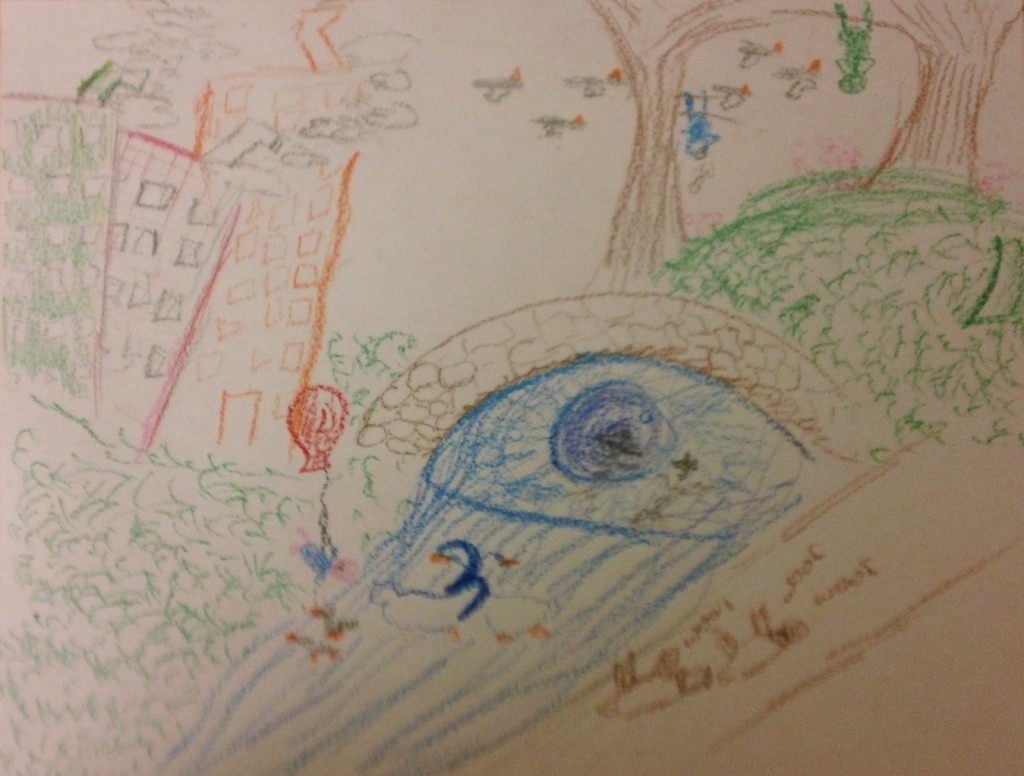 I Walked out of my apartment building and into the park
Fresh air all around, the sound of a lark.
A baby in the grass with his red balloon.
On the placid stream two swans and a loon.
Two dogs trot by with an affable bark
The flowered hills in the background, safe like an arc.

And then suddenly, the world’s turned upside down!
The universe’s smile flipped to a frown.
A whirlpool in the pond sucks two squirrels to the depths
Birds fall from the sky, chirping to their deaths
So much for a serene day walking ‘round.
Now I’m just trying to keep my feet on the ground.

This Is Just To Say by William Carlos Williams

I have eaten
the plums
that were in
the icebox

and which
you were probably
saving
for breakfast

Forgive me
they were delicious
so sweet
and so cold 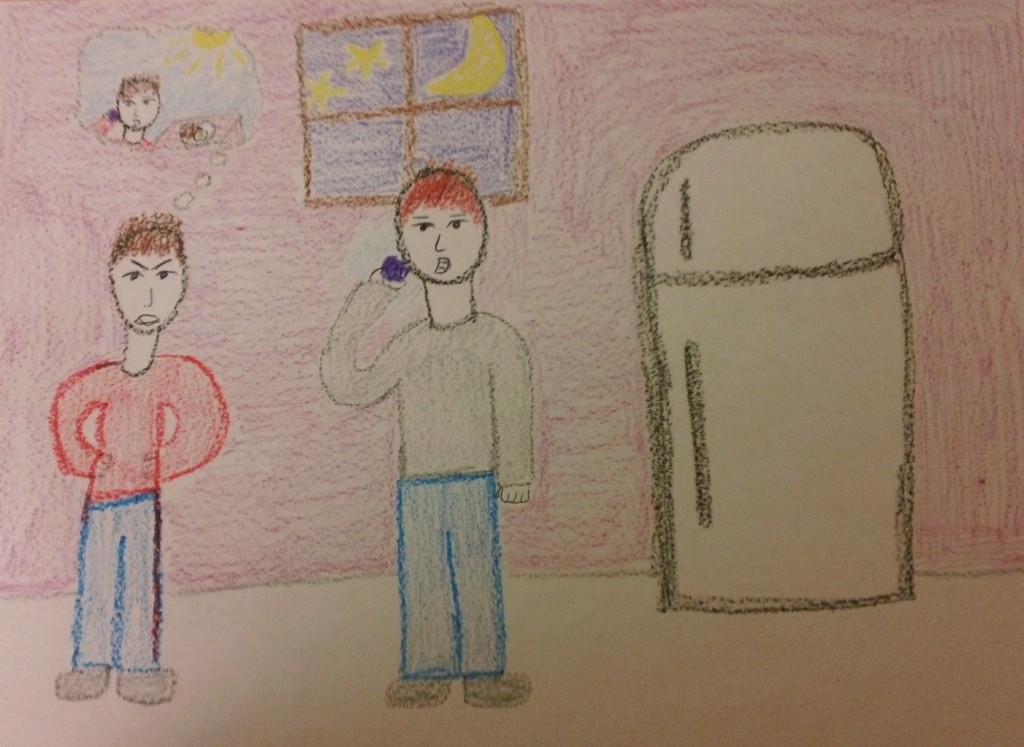 Standing in the kitchen talkin’ on the phone
Bob seems mad standing over there alone
Thinking ‘bout this morning when he was having breakfast
Now he’s thinking he should have invested in a necklace.

Now Steve’s on the phone telling his story
But Bob is like man “this is really boring.”

So they’re up all night discussing the next meal,
But they need to worry about who’s gonna pay the phone bill.