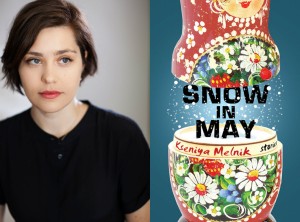 Kseniya Melnik‘s debut book is the linked story collection Snow in May, which was short-listed for the International Dylan Thomas Prize and long-listed for the Frank O’Connor
International Short Story Award. Born in Magadan, Russia, she moved to Alaska in 1998, at the age of 15. She received her MFA from New York University. Her work has appeared in The Brooklyn Rail, Epoch, Esquire (Russia), Virginia Quarterly Review, Prospect (UK), and was selected for Granta’s New Voices series. She is the 2015-2016 Jenny McKean Moore Writer-in-Washington at The George Washington University and is at work on a novel.
Lisa Page is the Director of Creative Writing at George Washington University. She is a longtime PEN/Faulkner board member, and past President.
“Kseniya Melnik’s beautiful Snow in May is an education in how history is routed, refracted, and reconciled inside the human heart. In sonorous, evocative prose, the triumphs and tragedies of Magadan are vividly brought to life. In 1890, Chekhov traveled to the Russian Far East—had he made the journey a century later, and gone a little farther north, these stories may well have been the result.” – Anthony Marra