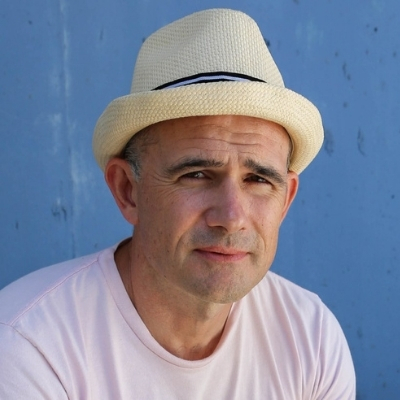 Mark Z. Danielewski was born in New York City and lives in Los Angeles. He is the author of the award-winning and bestselling novel House of Leaves, National Book Award finalist Only Revolutions, and the novella The Fifty Year Sword, which was performed on Halloween three years in a row at REDCAT. His books have been translated into multiple languages, and his work has been the focus of university classes and literary events. In 2015, Danielewski’s THROWN, a reflection on Matthew Barney’s CREMASTER 2, was displayed at the Guggenheim Museum during its Storylines exhibition. Between 2015-2017, Pantheon released five volumes of The Familiar, each an 880-page installment about a 12-year-old girl who finds a kitten and sets off a chain reaction with global consequences. With the release of the series, the New York Times declared Danielewski “America’s foremost literary Magus.” His latest release, The Little Blue Kite, is in bookstores now.