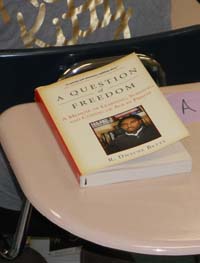 It was homecoming at Calvin Coolidge high school. The students in Ms. Berke’s fourth period class were loose and excited, draped in school colors, and Reginald Dwayne Betts wanted to talk about hospital rooms.

“My wife just had a baby so I’ve been in the hospital for the last few days, thinking about hospital rooms,” Betts told the class. “They can be a lot like prison, actually.” And he would know. Currently on hiatus from a prestigious Radcliffe fellowship at Harvard University to take part in our Reading Series, Betts–the author of a book of poems, Shahid Reads His Own Palm, and a memoir, A Question of Freedom–has been artfully dissecting to American prison experience since his own release from the Fairfax County Jail in 2005 (read more here, here, and especially here). And it’s that dissection that Ms. Berke’s students have been studying for the last few weeks, paging through his memoir, ready now with pointed questions on small sheets of paper that range from How do you feel about your father? to Could you ever go back to prison?

Betts’ answers, just like in his work, addressed the issues but not quite how one might expect. (Q: “Do you still talk to the person who you were arrested with?” A: “We were the best men in each other’s weddings.”) Which, over the course of an hour, was how Ms. Berke’s class got to know Dwayne Betts: on platform of unexpected candor and reflection, not just on prison but on his days leading up to it. “I had a rough time in high school,” he told the class. “When I was sixteen”–the age at which he was sentenced to prison–“I was stressed out because I thought the most important things happen in high school,” a sentiment given all the more resonance given Betts situation just months later: in front of a judge, answering for his role in a carjacking. But Betts is always careful not to present a simple, redemptive narrative for himself or anyone else: not in his poems, not in his prose, and certainly not in his Writers in Schools visits. He was in prison for nine years, and has spent the last five catching up in hyper speed: dual degrees in writing, a marriage, awards, accolades and a guest spot on Tavis Smiley. “The thing is, I’m still the guy who robbed a man,” he told the class. “I’ve put awards and other things on top of that person I was at sixteen, and I’ve changed the way he exists in the world to some degree, but I still know who I am, for better or worse.”

Reginald Dwayne Betts, figuring it out with Coolidge students. (Photo by Melanie Agnew.)

And who Betts is someone who–in the midst of talking about working with his co-prisoners to reduce their sentences, or falling in love with a sea of poetry—will stop mid-sentence to explain his time as a bookstore clerk (“I’m a good salesperson. I could sell water to the ocean”), or how how a hospital’s Similac subsidies strangely mimic the subsidy structure of the prison industrial complex. Yet he always brings it back to the lost Dwayne Betts of sixteen, talking to like-aged students about truths they know, which is what he did with Coolidge. “The way we define masculinity in high school is through violence,” he told the class. “On the way here I walked past two dudes skipping school, slap boxing on the corner. You know what they were doing? They were practicing.”

As we left, the students gave Betts congratulation cards for his family’s new arrival, and we waved goodbye then disappeared into a stairwell. But before we made our way up, a student from another class, hall pass in hand, shouted out. “Hey,” she said, “are you that man who wrote that book? About jail?” He nodded. “I love that book,” she said. So he doubled-back and acknowledged it with a thanks and a handshake, because Betts knows he’s that person now, too.

If you’re a DC high school teacher and you’d like to schedule a Writer’s in Schools visit, contact us at [email protected].