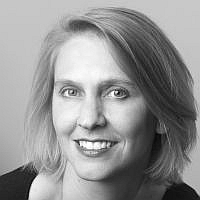 Last Thursday one teacher, one writer, and 70 Coolidge High School sophomores made Writers in Schools history. They had three WinS visits in a single day.

It’s not uncommon for three (or more) visits to occur in one day, but normally they are spread out over different schools, different teachers, and different writers. But on an overcast Thursday, Leslie Pietrzyk visited all three sections of Clare Berke’s 10th grade.

For me, the visit was not only unique in its length, but also in its content. I’ve heard Leslie discussed her debut novel Pears on a Willow Tree, which tells the story of four generations of Polish and Polish-American women. It was one of the first books by a local DC author that I read when I came to PEN/Faulkner last fall, and I bought a copy for my grandmother (who is not Polish, but who grew up in a Polish neighborhood) so that we could discuss it.

I’d never heard Leslie discuss her second novel, A Year and a Day, which chronicles a year in the life of a fifteen-year-old girl after the death of her mother. And, as Leslie put it in the car, it’s a much more difficult novel to discuss.

The students read A Year and a Day as part of a unit on how death is portrayed and understood in literature, pairing it with Ernest Gaines’ A Lesson Before Dying and they were curious about how Leslie’s personal experiences informed her writing. While I don’t want to give away every personal detail of her life, Leslie was only too happy to discuss her experience with death and how it became the central concern of the novel.

She left the students, many of whom were sheepish aspiring writers with a final thought, encouraging them to not shy away from using personal experiences in their own work: “There is some true thing to everything I’ve written,” she said, “Even if it doesn’t seem like it, that’s where powerful writing comes from—from something true.”