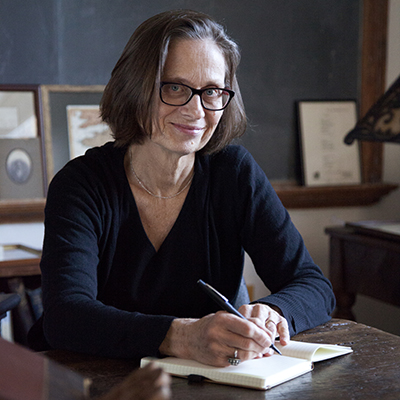 Lydia Davis’s ESSAYS ONE, her first nonfiction book, was published in 2019 by Farrar, Straus & Giroux. Lydia Davis is the author of VARIETIES OF DISTURBANCE, which was a National Book Award Finalist, SAMUEL JOHNSON IS INDIGNANT, ALMOST NO MEMORY, THE END OF THE STORY (a novel), and BREAK IT DOWN. THE COLLECTED STORIES OF LYDIA DAVIS (which combines the above four story collections volumes), was published by Farrar, Straus & Giroux in 2009. Her most recent collection of stories is CAN’T & WON’T (Farrar, Straus & Giroux, 2014). Her work has appeared in Conjunctions, Harper’s, The New Yorker, Bomb, The Paris Review, Tin House, McSweeney’s, and many other magazines and literary journals.  Davis is a translator of French works by Maurice Blanchot, Michael Leiris, Marcel Proust’s (SWANN’S WAY) and Gustave Flaubert (MADAME BOVARY). Among other honors, she has been awarded a MacArthur Fellowship, Guggenheim Fellowship and a Lannan Literary Prize, and has been named Chevalier and Officier of the Order of Arts and Letters by the French Government. In 2003, she won the French-American Translation Prize, and in 2005 she was inducted into the Academy of Arts & Sciences. In May 2013, she won the Man Booker International Prize, a biannual award for achievement in fiction on the world stage, which is distinct in that it considers literary excellence across the writer’s body of work. She lives in upstate New York with her family.