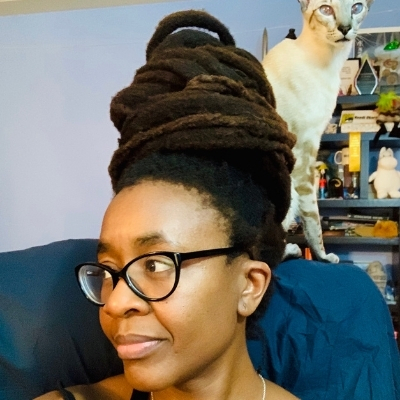 Nnedi Okorafor is an international award-winning writer of science fiction and fantasy for both children and adults. She is the winner of Nebula, World Fantasy, Eisner, Lodestar, Locus Awards and multiple Hugo Awards and her debut novel Zahrah the Windseeker won the prestigious Wole Soyinka Prize for Literature. The more specific terms for her works are africanfuturism and africanjujuism. Her many works include Who Fears Death (in development at HBO as a TV series), the Binti trilogy (in development at Hulu as a TV series), the Akata series and her most recent novella Remote Control. She is currently adapting Octavia Butler’s Wild Seed for TV with Amazon Studios. She lives with her daughter Anyaugo in Phoenix, AZ. Learn more about Nnedi at Nnedi.com and follow Nnedi on twitter (as @Nnedi), Facebook and Instagram.